All of our previous trips have been via car, but Austin, TX is way too far to drive from Rochester, NY. This one deserved a couple plane tickets. We hopped on a plane Friday afternoon and arrived in Austin by midnight. It was still 100 degrees at night, by the way.

Why go to Austin? A very special family reunion, that’s why. My family! I don’t usually go to these things. I’ve never been very close to my family. And honestly, being caged up with a bunch of them in a foreign area sounds less like a vacation and more like a nightmare, or at least a plot proposal for a new sequel in the Saw movie franchise.

But as it turns out, not all of my family is as crazy as the ones who raised me. More on that later.

Oh my god, the food. When I returned from Austin, all I wanted to talk about was the food. Still, all I want to talk about is the food. That Tex Mex is something else. Ughhh, I can’t find the words. Instead, I’ll just make stomach noises: euuuuuoooooo ggaaaraaahhhh vrrrruuuuuuuu euuhhooahhh.

Got it? Yeah, that’s how great it was. Here’s a place (Joe’s Mexican Bakery) we randomly found, right off the highway. The parking lot was bustling which we felt was as good a sign as any. END_OF_DOCUMENT_TOKEN_TO_BE_REPLACED

Lately, it has occurred to me that Rochester and I, maybe, perhaps, have got off on the wrong foot. It’s no secret my wife and I have been detesting where we live. We moved last August from the West Coast, and it’s just been… well… it’s been…  it’s been exhaustingly frustrating: rabies scare, smoke-ridden apartment, under employment, Polar Vortextation, stranded for hours because of shoddy mechanic work, knee injuries, rude strangers, us leaving every other weekend just to feel normal, underwhelming food…

And we’re not pessimists, I promise. We moved here with positivity and high hope. Like breakfast, we prefer the sunny side. Unfortunately Rochester had other plans. There’s this cycle. Every time we begin to think positive about where we live, we look up, smile at the sky, and then get crapped on by a metaphorical seagull (i.e., Rochester), crapped on right in the kisser.

But that is neither here nor there.

Like a rat in a maze hitting his head against the wall over (and over), I need a fresh start. SO here it is. I’m starting over. I’m giving Rochester another shot, a fair shake, a second chance, some water under the bridge, a lumberjack handshake, a cough syrup detox and other clichés…

And why not? It’s summer, the first day of summer; this is when you get to go outside.

Lake Ontario–give it another chance!

I remember the first time I saw Lake Ontario, my first Great Lake! What a sight. Immense and infinite. I couldn’t look away, and like an ocean, I desperately yearned to know its secrets. But then I smelled Lake Ontario. And then I saw the grossly polluted Genesee River endlessly dumping into it. And then I said, “Hmmm, that’s too bad. Guess I’ll never come back here again.”

Well, nearly six months later, Megan and I took a trip up to the lake, and, I have to admit, I had a wonderful time. The smell wasn’t bad (we weren’t as close to the Genesee), and I enjoyed the lake’s serenity. I skipped rocks like a boss (that is, a boss who skips rocks), and Megan found some neat “ocean” glass. The sun was out and the breeze was perfect. 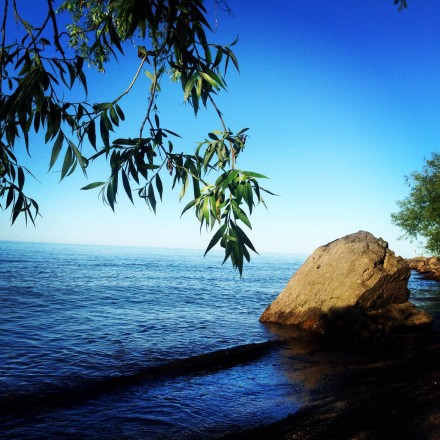 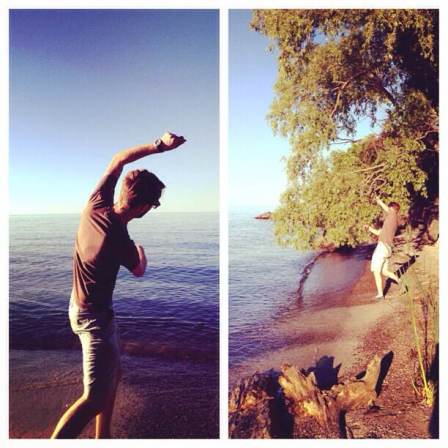 Oh my sweet. I sure do love Canada. You know, for a neighboring country to the north, we sure lucked out. They could’ve been jerks. Maybe they would’ve thought maple syrup was dumb; maybe they would’ve specialized primarily in stick figures. I don’t know, I’m spitballing. Luckily, Canadians are incredible.

Megan and I have a rich history with Canada. We honeymooned in Vancouver and White Rock, and we find the memories fond. The vibrant and varying terrain. The food. The traffic ticket mailed to us three weeks later. Well, that wasn’t so great. But that’s another story for another time.

SIDE NOTE: We still don’t know who was driving during the red light ticket. But let’s just say it wasn’t me.

After we moved to Rochester, I looked up a map of the Upstate area and discovered we lived right underneath Toronto, opposite Lake Ontario. Pretty neat. We initially didn’t have time nor the funds to visit. Thankfully, we finally made the time, if only 36 hours.

So, without further adieu, here’s the next edition of Weekend (Ultimate) Warriors: Toronto.

Without traffic, Toronto is about 2.5 hours from Rochester. After passing through Niagara Falls, we headed onto a highway called “Queen Elizabeth Way,” which is about as Canadian a highway name as I could’ve hoped for.

While driving on the Queen E, after shutting off our cell phone data, we remembered our Garmin GPS is a hyper-patriotic robot who refuses to work outside the States. Further, we forgot to withdraw cash, and we were also without tourist maps and city books. After I suffered a thirty-second mini-freakout in my head, chest, and elbows, I discovered the predicament quite refreshing! Unlike New York City, Cleveland, Ithaca, and anywhere in Rochester (where we use Yelp and mobile apps to tell us how to breathe), Megan and I had to rely on our flesh-harddrives (our brains) and our good ol’ fashioned sense of direction to get us around town. Thankfully, Toronto is one of the best laid-out metropolitan cities I’ve ever explored. END_OF_DOCUMENT_TOKEN_TO_BE_REPLACED

*Kids, back in 2013 when your mom and I moved to Rochester, I had to immediately address a problem of epic proportions. So big, in fact, that the word “epic” is indeed applicable, but not entirely accurate. Rather, let’s use a better word. Let’s call it “legendary.”

The problem, kids, was the how the hell I would make my morning coffee.

See, we got rid of everything when we moved—everything that wouldn’t fit in the car. And in a blind rage of yard sales and give aways, my french press was lost and forgotten in the hubbub. As we drove across the continent, stopping at gas stations for dollar “coffee,” I prayed for a brighter future. A bolder future. An acidic future. One that involved coffee.

You know, the one.

But I’m getting ahead of myself. It all started in Idaho when I was in my early twenties. I worked at a Natural Foods store in Coeur d’Alene where local roasters would come to teach—as monks enlighten—and they would also come to replenish their store bins. It was through these vendors (Doma, Evans Bros, and Equal Exchange) that I learned to sip, spit, and smell my coffee.

And coffee became more than just a warm liquidated caffeine which instigated BMs. Coffee became everything. I had learned the secrets of the bean. I began to taste subtle notes. I researched and learned growing and roasting techniques. My lips began to automatically scowl at shelves with Folgers and hands holding Starbucks.

I preached about Fair Trade and just wages (annoying everyone I talked to).

Before long, I couldn’t depend on work coffee. I had to make the “plunge” and buy a home maker, something my coffee monk friends would approve of. The french press, of course. It was a single cup beauty, and she served it hot, gritty, and frighteningly strong. END_OF_DOCUMENT_TOKEN_TO_BE_REPLACED

New Year’s Resolutions have a bad wrap. To be fair, the word “lose” is implied in the name. I prefer resoWINtions (I’m a crafty wordsmither, no?). Pastors, blogs, magazines, everyday folks, they all clamber resolution warnings. No doubt, your ear-holes and eye-balls have been plagued with a mess of conflicting messages. Christians, I’ve found, like to shrug off New Years Resolutions. Maybe they see it as shallow. I don’t know. Some folks, maybe, don’t like to be reminded how susceptible to failure they are.

As for me, I’m a fan of new challenges. I like them all year-round. Once, I only used chopsticks for three months or so.

SIDE NOTE: Hands down, salad is best eaten with chopsticks. END_OF_DOCUMENT_TOKEN_TO_BE_REPLACED

My wife and I moved to Rochester, New York this Fall. We have yet to come across any good Mexican food. I’m sure it exist here in Western New York; it’s got to, right? In California, mexican food is ubiquitous. It’s a mass supply that begets demand in the most intrinsic, snobbish way. I’m damn proud of it.

Any southern Californian will tell you: Good mexican food is not created equal.

Want to know my review process for mexican restaurants? Of course you do! What else do you have going on anyway?

2. Is the atmosphere authentic? Have you ever heard a Top 40s radio station in an ethnic restaurant? Isn’t it totally lame? Lady Gaga in a Mexican restaurant; Justin Bieber in an Italian bistro… Once, I ate at a Chinese restaurant and heard country music over the speakers (I wrote my congressman). For me, atmosphere is (almost) everything. Mariachi or bust.

3. Are you insecure when you order?  If there’s no awkwardness when your order, then it’s not authentic: “Polo… Poyo.. adob…” The menu should read in spanish, and those behind the counter should speak little or no english. Can a white man can make a good Mexican meal? Why not? But let’s be honest, who do you want making your torta, Abejundio? Or Larry?

4. How does the salsa/hot sauce/pico de gallo rate? The pico can make or break a restaurant for me; it can even upgrade a sub-par meal to “Great.” (After all, mexican food is about simplicity). A really good test for a new restaurant is to order the most basic Mexican meal ever: the bean and cheese burrito. Pour some pico or hot sauce on top and see what happens.

5. Are you afraid you might get sick? If you answered “yes,” then you are probably in the right place. Being afraid to sit down is a very, very good sign. In my experience, the more I worry about my safety and health, the better the food turns out. Here’s my advice: Find a decent middle ground to start in; you might have to build up your immune system up a bit. 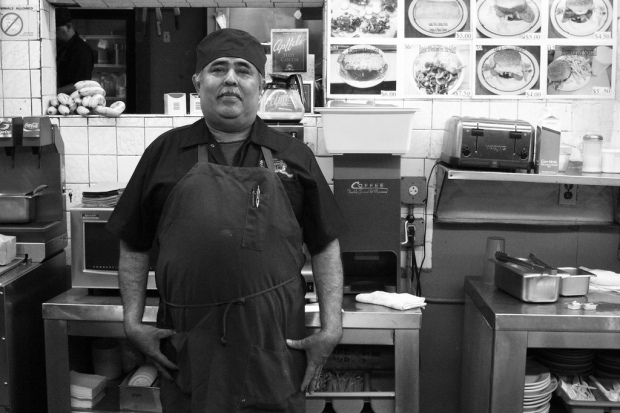 What do you think? What do you look for in a good mexican restaurant? Any suggestions for Mexican food in Rochester?