Prolific songwriters are annoying. You hear about guys like Kevin Devine and you say, “Wow! Can’t wait to get into this,” and suddenly eight years go by and you’ve missed nine albums and two side-projects (see also, Ryan Adams).

Despite some familiarity with his catalogue (mostly the Bubblegum and Bulldozer albums), I fully admit that I should be a bigger fan of Kevin Devine than I am. Here’s my reasoning:

What happens is this: I see Kevin Devine in concert, I walk away in awe, and then I listen to his records and come away disappointed. Call it the “Curse of the Great Live Band,” but I find his studio stuff often fails to capture the spirit, energy and vulnerability of what I hear on stage.

There’s also the problem that his recordings sound like crap.

But I’m getting ahead of myself. Let’s talk Instigator. 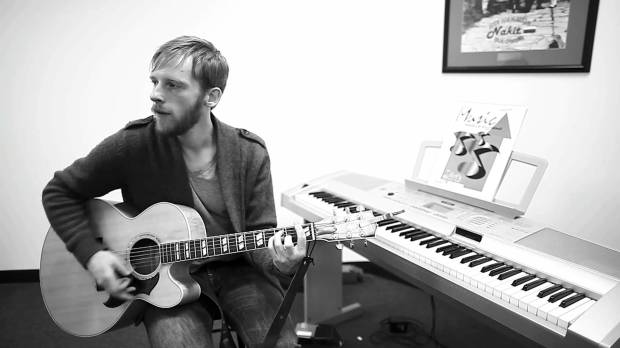 Devine’s 9th studio album, Instigator, showcases the efficient songwriter as a man who has reached a musical plateau and comfortably made camp. His compositions are like pop-rock junk food (empty calories, but delicious). Lyrically, Devine does add some protein to the dish, eschewing the well-worn indie cliches of the ever-tempestuous love and heartbreak. Instead, Devine tackles larger societal issues, speaking to pre and post-911 culture, police brutality, white privilege, and theocratic hypocrisy, to name a few.

“No Why” and “Instigator” are an infectious pair — a one-two punch that set the pace for the rest of the record. At first listen these two sound like throw away pop songs, but dig deeper and you’ll hear an artist using his medium to craft substance. “No Why” recollects society’s guttural response to the 911 tragedy, for better and for worse (mostly worse): “I weigh the world on a sliding scale, and I/ Wouldn’t worry if “heads” or “tails” decides/ We’re all strapped to the spinning wheel/ And there’s a blindfolded man in a tux throwing knives/ There’s no why.”

“Magic Moment” keeps the pace with a swinging, fun chorus that revisits the angsty bellows of The (early) Early November. Certainly “Freddie Gray Blues” is a highlight and stands among Devine’s best work. The acoustic-driven, soulful protest song aptly captures the delicate and dangerous balance of criticizing police in our either/or society. The idea that you either love all cops or you hate all cops is a fallacy Devine tries to disprove:

The lyrics here are burdensome, and borderline silly, but we can suppose that’s the point. We shouldn’t have to preface progressive conversations with family history, but we do.

“No History” could be another standout track, but here is where I must digress and talk production value. For nearly every song on Instigator borders on great, but is hampered by a troublesome mix. “No History,” especially, is a good song that gets lost in a clutter of layers and filters, and it’s frustrating. Compare it to the acoustic version and you’ll hear a missed opportunity of a soulful song that could’ve had a bigger impact by being stripped raw and bare (yes, even with the goddamn band).

Blaming the mix on poor-production would be misleading and incorrect. There’s no lack of talent behind the glass. It’s not like they’re using Garageband and SM-52s — they’re professionals funded by record labels. Truthfully, I have a hard time putting my finger on exactly what’s wrong (I won’t pretend to be a sound engineer). But I will say — to me — Devine’s records remind me of the way Instagram filters ruin good pictures. Something stylistic is distracting from the art.

Engineering aside, there’s no question Devine’s songs have heart that hook. And these songs hook deep. Get past the mix and you’ll find a good album that has a lot to say. But get on it quick. Chance are he’s already working on something new. The jerk.