That statement may mean nothing to you, but to me, it’s everything. See, my memory is not what it used to be. (Of course, how would I know?)

Maybe my memory was always lousy. Maybe I didn’t eat enough pistachios as a kid. I’m not trying to be melodramatic; I don’t think there’s anything medical going on. The truth is that my friends will reminisce, or my wife will remind me of some place we visited a few years back. I will eventually recall, but the memories must be coaxed, primed. It’s like turning a page in a novel with two pages stuck together: I just need a minute to get them unstuck.

But music? Now that’s something my memory can get behind!

SIDE NOTE: My theory is that since everyone around me has always had amazing memories, I never felt it necessary to encode much to long-term. I saved this brain power for much more important things, like charming women and learning guitar.

Concerning concerts, I can tell you who I’ve seen, how many times I’ve seen ‘em, and which song stuck out the most. I can hack any musical memory and transport myself back to the venue, where all of a sudden I’m wearing the moody, black emo-clothing of my high school years, and I’m praying to God that the drunk stranger standing next to me will stop singing so damn loud.

Fair warning: they say every time you access a memory, you alter it. With great trepidation, then, I’m going to go ahead and access a memory for you — a really, really fond memory, one of my favorites — knowing that I might wreck it in the process. Wish me luck.

*Closes eyes, knocks on the door of his mind palace*

The Swell Season – Live at The Paramount Theatre, Oakland – April, 2008 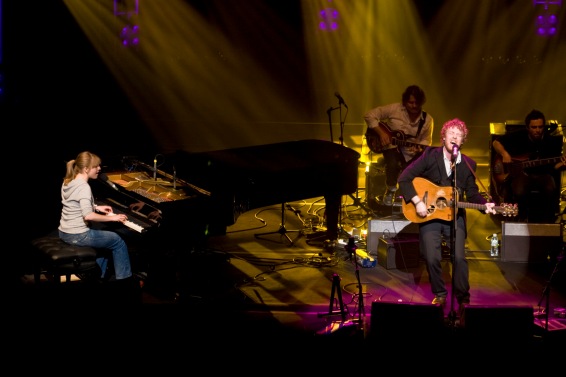 Tickets sold out fast. Having just won their Oscar (Best Song for the movie Once), The Swell Season were blowing up bigtime. They were an energetic folk duo founded by Glen Hansard and Markéta Irglová, who, when seen live, were often accompanied by a backing band that included violin, percussion, bass, etc. I won’t pretend I was a longtime fan. I had discovered them the way almost everyone else did: through the movie.

The Swell Season was easily my favorite band at the time. Maybe I was obsessed. Maybe I still am.

Glen, who has since successfully navigated a solo career, was already well known at the time for his earlier work with The Frames — a rock group out of Dublin. I didn’t dive into The Frames until much later, but my friend Aaron was already familiar with their stuff. Like me, Aaron had also flirted with obsession when it came to The Swell Season. We saw a lot of each other that year, Aaron and I. He sold shoes across the street from where I sold gasoline. Over chips and energy drinks we often talked of seeing The Swell Season and we shared notes from our favorite songs.

When the Oakland performance was announced we were giddy, but tickets were long gone before we ever got a chance to even log in to Ticketmaster. 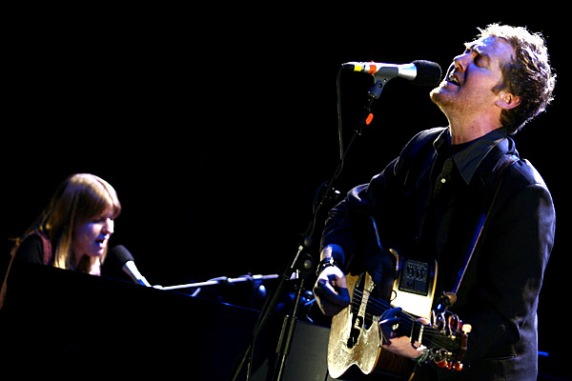 Optimistic and carefree, Aaron and I drove four hours on a whim. We both had the day off. Word to the wise: managing retail offers few benefits, but — at 21 years old — first pick of the store schedule is as good as medical and dental.

I had never been to Oakland before. All I knew about Oakland was that the Raiders frequently lost there, and that you should probably stay out of the city. This was well before the great hipster gentrification of 2012. I’ve been to Oakland since and even I don’t recognize it.

If we couldn’t get tickets to the show, the plan — I think — was to hang out with our friend David, who at that time was going to school at San Francisco State. But really, I would’ve found a way to scale the building and watch from the rafters, had I not obtained a ticket legally.

Me: You don’t happen to have any tickets left, do you? The show tonight?

Lady: *Taps on computer for ungodly amount of time* Sure, honey. You need two?

Me: *Mouth open, unbelieving, waiting for her to reveal the punchline to some sick joke*

To this day, I question the memory of how close we were to the front of the stage. We weren’t within the first five rows, I know that. Maybe the sixth? The eighth? Regardless, the magical thing about seeing The Swell Season is that your seat doesn’t matter. Wherever you are you’re in the front row, because they’re that inviting, that electric.

Let’s say we were in the eighth row.

Or another way to put it, we were one row behind Ben Stiller. Because, out of nowhere, here comes actor/director/comedian/guy-who-made-The-Cable-Guy Ben Stiller. Him and his wife sit right in front of us. I remember turning to Aaron and saying, “Is this really happening?” We shook our heads and laughed. Aaron — the anti-wingman — slapped my hand whenever I reached towards Mr. Stiller. “I just want him to know I’m here!”

Thankfully, the lights soon dimmed and Glen walked out, waving to the audience with a humble, Irish grin. I probably would have shed a tear had I not been so genuinely excited.

First it was just Glen doing his buskar shtick (that is, unplugged with no microphone) with “Say It To Me Now.” The tune was incredibly powerful to witness, especially since singing on the street is where the guy got his start. Even oceans away from his home, in a venue as big and fancy as the Paramount, Glen never lost his roots. I’ve seen him do this since, watching my fair share of DVDs, Youtube videos and follow-up concerts, but it’s never been as special as the first time.

But that’s not the best part.

Later in the evening, during their performance of “Leave,” Aaron leaned over and said, “This is my favorite song of theirs.” He was bewildered, shaking his head in disbelief. And I understood. We were both coming from the same place: Superfans who just two hours ago weren’t sure we’d get into the building. Yet here we were, one row behind Ben Stiller, listening to our favorite songs performed with all the energy and sensitivity unique to a Swell Season performance.

Then, after seeing Aaron’s face naked with joy, basking like a burped baby — an unexpected wave of sadness hit me. What if I didn’t get to see my favorite song performed? I know in the grand scheme of life a crisis such as this may read as trite, but in the middle of a concert like this, the only thing that matters, I repeat, THE ONLY THING THAT MATTERS, is whether or not your favorite band plays your favorite song. It’s just science.

What made matters worse is that my favorite song was a b-side cover of “Into the Mystic” by Van Morrison. It came as a bonus track on the special edition of the Once soundtrack. I never in a million years expected them to play it. Only in a dream scenario would they play it.

And then I started thinking: Hey, if this isn’t a dream scenario, what is?

But then I thought: What if I’m just setting myself up for failure? Expectations ruin everything, you know.

And then Aaron was like: You’re thinking too loud, shut up.

So the show went on.

Between songs, Glen talks to the audience. It brings a living room vibe that is almost always the best part of every Swell Season/Glen Hansard performance. I remember he talked a lot that night, anywhere from 5 – 15 minutes depending on the tune. The band, however, was on fire. They played their hits, Frames songs, and new tunes too. Every single one was amazing, but of course, it wasn’t my song, was it? It wasn’t “Into the Mystic,” and it really began to bother me.

The regular set ended. Okay, I thought, probably play it in the encore. So they returned for their encore, but no. Song after song and they just weren’t going to do it.

A sobering realization hit me: I was not going to hear my song.

And then suddenly Glen took suggestions from the audience for the last song. Hope again flared like a cyst I just couldn’t pop. Everyone began to yell. I felt foolish, but like a child I yelled too. “Into the Mystic” I screamed. “Pleeeeeeeease!” I tried my best but he didn’t hear. Instead, they huddled, and after a brief pause, played “Star Star” — an old and very popular Frames song. How predictable, I thought. By midway through the song I loved it and was doing okay. I’m lucky in that if there’s one Frames song to make you feel better, it’s “Star Star.”

The band lined up, took a bow. The theater roared with applause, everyone on their feet, cheering like they just won the Super Bowl. Glen, Marketa and the backing band began to walk off stage. In preparation to leave I looked down at my seat to see if I had dropped anything, but really, I was hiding my face, feigning satisfaction and fighting off tears. How could I be disappointed in a night like this? A show as good as this?

It was silly, I know, but my heart was set on hearing the tune.

I offered a thin smile to Aaron, the best I could do. One more time I looked up at the stage, at Glen, always the last from the band to leave. Almost gone completely before something took hold of him. For some reason I’ll never know, Glen Hansard abruptly halted his march off stage, turned around, and shook his head. He yelled,“No. One more. One more.”

So, like something out of a dream, he walked back to center stage, picked up his guitar and called everyone back out.

One strum and I knew it immediately. It was “Into the Mystic.”

“This is my favorite song,” I told Aaron, leaning. “I know,” he said. I don’t think I ever smiled a bigger smile in all my life.

Of course, “Into the Mystic” was the most beautiful song I’ve ever heard performed. Charming, full of energy, folksy, stomping, rich. I’ll never forget it — as long as I live and maybe even after. The thrill of those chords, the band rushing back on stage, one more after a long encore. The Swell Season, live in Oakland in 2008 was a dream scenario. The risk, the tickets, the seats, the luck — the story.

I carry it with me, both like a musical medal and a personal milestone. See — this memory is what I fall back on when I need a reminder that life isn’t always cruel, that things can and will work out. You just got to have faith and you got to show up.

There is a story behind every setlist, I have found. It’s up to us to recall, to relive and to cherish, to summon our songs from the mystic, where they live forever in our memory.