I have one of those iPod Classics. Ancient and useless. Scratch on the screen. You know how it goes. In an attempt to make my Classic more relevant, I found an unused menu button. Enter podcasts.

You may already be on the podcast train, maybe not. I tend to be late on trends. Either way, here are my top 5 favorite podcasts: 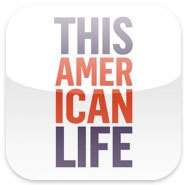 I know I’m not alone on this. This American Life is one of the most (if not the most) beloved radio program in the country. If you’re like me, then you probably never gave it a fair shot. This podcast version is a great way to keep updated with the show, and gives you the ability to listen whenever you want.

Like a modern NPR Mr. Rogers, host Ira Glass welcomes you in and takes you on a journey. Some stories fiction; most are not. The segments will make you laugh, others cry, others squeal. What’s most amazing is This American Life’s ability to churn out high level-original storytelling week-after-week, year-after-year.

Plant Money is great for any business minded, economically charged person. But if you’re not, it’s still great. My wife could care less about politics and economics but still loves this program. They do a wonderful job of picking interesting stories and tying them to relevant economic themes.

It’s a great tool for someone, like myself, trying to stay informed on the economy, though gets sick of the bias heavy, sensational media coverage. Even if you hate economics, give it a shot!

You may or may not know about this program. I had no idea it existed till a few months ago. Most of my friends did. Thrilling Adventure Hour is a comedy sketch podcast, filmed live in front of a studio audience and created by Ben Acker and Ben Blacker. Their tag line is: “New time podcasts in the style of old-time radio.”

It can be hit or miss, but stick with it for a couple weeks. You’ll soon be introduced to all of the hilarious, reoccurring characters. Sparks Nevada: Marshall on Mars, Captain Laserbeam, and my favorite: Frank and Sadie Doyle (starring Paul F. Thompkins).

There’s not much to say about this one. It’s just freakin’ hilarious. It’s from the makers of Relevant Magazine, and regularly has four people you will grow to love. If you’re a twenty to thirty year-old something, slightly spiritual and love to “goof”, then this is probably right up your alley.

Relevant is a religious magazine, but they do a great job at not being lame about it. It’s simply addictive. There’s great music, movie suggestions, and hilarious weekly “slices.” Also a plus are the featured guests, ranging from authors to musicians to Junglebird himself.

From the people who brought you the book and that awesome documentary, comes Freakonomics Radio. Though it revolves around economics and business markets, I would never define it as a business podcast.

Rather, I would say it’s a thought-engaging conversational starting piece of radio. They “reveal the hidden side of everything.” If you enjoyed the book or the documentary (currently on Netflix), then you will definitely love the podcast.

You may not agree with everything stated or proposed, but that’s not the point. Instead, apply the theories, test them, and come to your own conclusion. After all, that’s what critical thinking is?

Just a note: Usually they rotate their programming. Every other week is a full episode (usually 30 minutes) and in between weeks are five minute segments released originally on NPR’s Marketplace.

Any suggestions? Let me know your favorites!