Last weekend, I had the pleasure of seeing Famous Writers in Hell, a one-act play I wrote and submitted to the 16th Annual Rochester One-Act Festival. What an experience! I’ve said this so many times now it sounds cliche, but there is no stranger (or awesomer) experience than seeing written characters come to life.

The festival was written, directed, and produced entirely by University of Rochester students. The quality of production and acting was to be a surprise to me, being unfamiliar with UR theater besides one performance. I had no idea what to expect! Just to be safe, in the months prior to the festival, I convinced myself everything would be awful and that I should prepare for the worst.

Also, I thought it best to stay away from the production team as much as possible. The director seemed both capable and passionate; besides, I wanted to see someone else’s interpretation. Since I’m busier than a vacant badger, it wasn’t very hard to keep my distance. I’m glad I did. The surprise of the performance was an experience I doubt I’ll soon (if ever) forget.

So how was it? Impressive!, to say the least. I saw it an opening night to a sold-out crowd which was very special. The stage design team did an incredible job, the costume design was spot on, the lighting crew was excellent, and of course the actors were great. The theater team managed a merger of professionalism and free spirit. And though some things were tweaked and changed from my script, I welcomed them as improvements because, honestly, they were.

Specifically, I really loved seeing how stage lighting and background music can be actively used. When I was writing, I didn’t think much of atmosphere. It’s interesting how lighting and music can help convey and even punctuate certain tones.

Finally, I wanted to go to the last performance just see it again, and I’m glad I did because the Theater Department happened to give out closing awards (which I was unaware of). I walked away with Best Writer and a cash prize!

At this point, whenever writing pays, I find a deep valley, walk to the edge, and yell, “Victory!!!!”

This whole experience has been pretty amazing, considering. Let’s hope this trend continues.

What’s next? Good question. I think I’ll try to get back in to a blogging routine, and go from there.

Hey! Check out my cast! 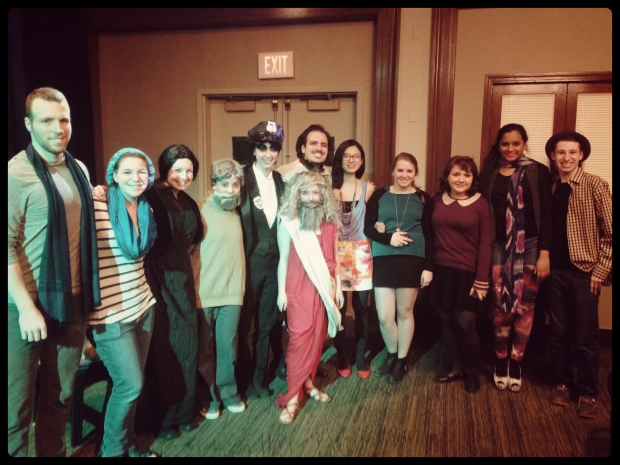 Photo at the top: Last scene of the play. Hemingway in chains, Poe/The Butler in the police outfit, Shakespeare in the back in tears, Mary Shelley on her phone sitting with the undergrads, and off to the right, The Writer.