“I don’t want to smell it.” Davey lifts up the plate and pushes it towards my face. I jerk my head back, saving my nose from shame.

“My sushi is drenched in piss, here—“ he lifts the plate higher. “Brian, I’m telling you, my rainbow roll is absolutely radiating of piss.” We stare at each other, and Davey doesn’t budge: “Smell it!”

“Get your sushi out of my face.” One by one, surrounding tables pick up our conversation and begin eating their edamame like popcorn. One skinny Japanese waitress—the one who isn’t fooling anyone with that accent—she walks by and finds us arguing.

“Ever-ting arright?” She twirls her pointer in a curl. Her name tag says Sarah.

“It smells like pee.” The quick sound of a half-popped edamame shell plopping into a bowl of soy sauce is heard. Even the fish have stopped swimming.

“Davey…” I start, but no words come. They never do. With Davey, my sentences often deconstruct and hide behind my teeth. Davey hates it when I start sentences and never finish ‘em. I see his eyebrows draw closer, and I can tell he’s annoyed.

“You didn’t even smell it!” Davey isn’t offended, but he’s putting on a good show. He hopes to get a free meal out of all this. It never works. “Ma’m,” he says, swallowing, emphasizing, “Did you pee on my rainbow roll?” This poor woman. The entire restaurant is watching and whispering. She’s getting red, but I can only guess. My eyes are fixed squarely on the chopsticks in my hand, swirling pink ginger on the corner of my dish.

“I bring you new prate.” Gracefully, Sarah grabs Davey’s plate. I glance and meet her eyes, for a second, and she looks like the devil. Red and all. She leaves for the kitchen and I hear the house music increase in volume. Davey smiles, and I hate him for it. “Can you believe that accent?” he says.

“What’d you do that for? The next roll will actually have pee on it. You do realize this?”

“You didn’t even smell it.”

“Sir.” Some tall, white guy in a black suit interrupts us and stands next to the table. I know he’s the manager because his shirt is colored maroon. Maroon, you see, is the official dress-shirt color of restaurant managers. “I just want to apologize for the… misunderstanding. I hear the food was not.. up to standard.” He’s looking at me, and I become furious.

“It wasn’t my roll, you got that, Ace?” I point to my brother: “It was his.” Davey’s left hand is on his brow, and like a cue-ball approaching a corner pocket, his eyes roll slowly upward until finally meeting the manager’s. Davey can be a real asshole sometimes.

“The meal is on the house.” The manager smiles without his teeth. He’s fat, and I trust him for it.

“Holy shit,” says Davey, the room again halting its speech, “there really was piss on that rainbow roll, wasn’t there?”

“Wasn’t there? Ho-lee-shet.” I begin to wonder. Davey picks his napkin off his lap and throws it on the plate. He stands, shaking his head, laughing. I sip my Sprite. “What kind of—we dressed up. Me and my friend here. We drove across town. Paid for parking!”

“And you give me pissy sushi!” He’s yelling now, commanding attention, the manager shaking his head at worried customers.

“I’m sure this is all some… misunderstanding. I’m sure there wasn’t—”

“Oh, so I’m a liar now.” Oh god. “One question,” says Davey, approaching the fat man slowly, using his hands as a grotesque gesture, “was it a sprinkle—just a little garnish, an afterthought, or, rather,” he’s really playing the room now, “do you submerge the roll in a BATCH of piss!”

“That is enough!” I hear gagging followed by a purge. “I’m afraid I have to ask you two gentlemen to leave.”

“Fuck yourself, bozo!” Davey spits in the man’s face, and slaps my water glass off the table. I hear it break, and I know it’s time to go. 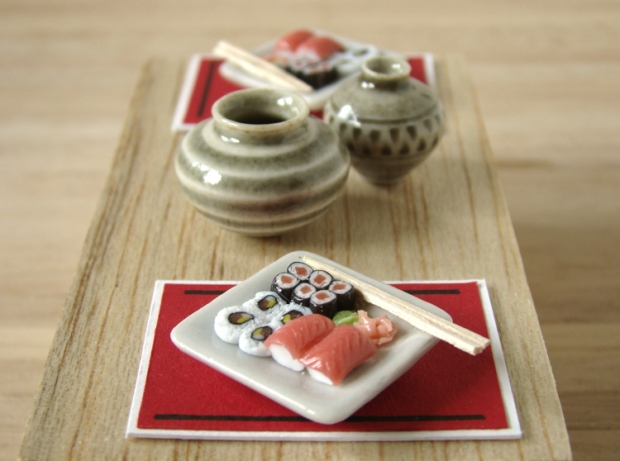