The most exciting part about shuffling your Ipod is the process of rediscovery.

The Rocket Summer has been a band (sort of) in existence since 2003. It’s crazy to think how long ago that was. I mean, seven years, holy smokes! I had friends listening to him (Bryce Avery) since the very beginning. I was a little slow and caught on sometime in later 2004. Probably after I graduated High School and sometime during my internship with the Militia Group record label in Orange County, CA. Either way, I remember getting a free copy of Calendar Days, and loving it completely. I also remember sharing Bryce with my North Hollywood roommates. They hated  it completely.

TV Family was a great song, but it always seemed to be out shadowed by other songs on the album. I originally loved the song Saturday, but eventually really held on to What We Hate, We Make as my favorite. It was honest and real.

I always liked TV Family, a great ending to a great album. However, it just came across as kind of silly. The fact that Jesus would call Bryce, “B,” just made me giggle. It felt like Bryce was balancing a little too closely on the “Disney-pop” tight wire and could fall any minute. The last thing the album needed was to be any cuter.

A few nights ago TV Family shuffled onto my Ipod on the way home. I pulled into the driveway after listening to it three times in a row. Who knows how many years had passed since I even listened to the Calendar Days at all?

At first it was the jazzy chords Bryce plays on the beginning that put me in a daze of memories. It seemed to match the rain and my mood well enough. However, I soon came to note that there was something else grabbing me. Something in the lyrics that was familiar, yet at the same time oddly unfamiliar. It was that same line I had brushed off years earlier where Jesus calls Bryce, “B.”

I came inside the house, we had dinner, and my wife insisted that we read the Bible. We have been slowly working through Hebrews. That night we read Hebrews 4.

Therefore, since we have a great high priest who has passed through the heavens, Jesus the Son of God, let us hold fast our confession. For we do not have a high priest who cannot sympathize with our weaknesses, but One who has been tempted in all things as we are, yet without sin. Therefore let us draw near with confidence to the throne of grace, so that we may receive mercy and find grace to help in time of need.

I had read these verses before, but I think the drive home had properly prepared my heart to read them that night. It helped revealed to me (again) the personal nature of Jesus Messiah. Not some impersonal God who doesn’t know us and love us, but the one true God who came to earth as a human so that he could identify with His children (not to mention die for them).

I thought about that part in Matthew 25:

It’s a beautiful concept really; the Creator of the life taking you by the hand and saying “well done.” My pastor quotes that verse a lot and says how great it will be to hear it. The more my pastor quotes it the more impersonal it sounds to me. “Well done thou…” I always picture the knight from Indiana Jones 3 after Indy picks the right cup… “You have chosen… wisely.” 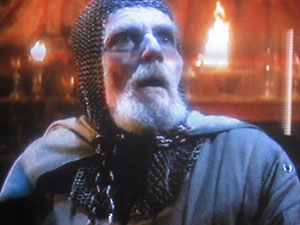 What I’m getting at is that there are certain things you hear in church that tend to become dull. The Bible was written with the extent to cover a lot of ground. It wasn’t written for any one person. The consequence is that we think it was written for only us. So we tend to trap our God into what we read in the Bible and say things like, “As if he would ever say that.”

He is larger than our minds can comprehend; yet he knows us by name. He is un-confinable, yet He wrote the Bible so we’d search after Him. I just worry that we trap Him into this “character” we read about. We forget that He is not an English knight waiting for us in a cave. We forget that He is real and living, and that He loves us dearly. He knows us so well; He may even use a nickname when He meets us face to face. After all, we are His children.

I wonder what Jesus will say when I meet him?

“Oh Jesus, thank you so much for saying that.”